The Pros and Cons of iCloud

Cloud computing is believed to have been invented by Joseph Carl Robnett Licklider while he was working as a computer scientist with the Advanced Research Projects Agency Network (ARPANET) in the 1960s. The cloud symbol was actually used as early as 1977 to represent networks of computers in the original ARPANET.

In the decades since its conception, cloud computing technology has advanced rapidly. In 1983, online service provider CompuServe offered its users a small amount of storage that could be used to store any file. In 1994, AT&T launch an entirely web-based platform for personal and business communications called PersonaLink Services. The term “cloud computing” was only popularized in 2006 when Amazon released its Elastic Compute Cloud product.

iCloud, which is arguably the most popular cloud storage platform in the world today, was launched by Apple Inc. on 2017. As of 2016, the service had almost 800 million users.

iCloud is a cloud computing and cloud storage service developed by Apple Inc. It provides its users a platform to store data on remote services that are downloadable on iOS, MacOS, and Windows devices. iCloud subscribers can use the service to store various types of data from text documents, to high-quality photos, to music files, and they can back them up wirelessly to iCloud.

There’s no doubt that iCloud is a very useful tool. However, just like any technology, it isn’t perfect. Yes, it offers users plenty of legitimate benefits, but it has its drawbacks too. To understand further, let’s examine the different advantages and disadvantages of iCloud.

The main thing that iCloud has going for it is that it works really well and is very convenient to use. Its user-friendly interface means you’ll quickly get the hang of it even if you’re new to the world of Apple devices. You’d be hard pressed to commit any errors while using the service.

With iCloud’s synchronization feature, your edits are saved across all your Apple devices whenever you make changes to a file. This means that you don’t have to go through the hassle of copying your files multiple times if you have more than one Apple device.

iCloud’s Photo Library allows you to access your images wherever you may be in the world. Even if you’re offline, you can still manage your library. When you delete any file offline, that edit will sync across all your Apple devices once you’re back online.

On iCloud, you can have up to a maximum of 2TB worth of storage. That’s plenty of space, considering that even high-end laptops usually only have 1TB worth of storage available. This amount of storage means you can potentially store thousands of photos and hundreds of videos without running out of space.

iCloud’s number one disadvantage is its high costs. For US users, the subscription fee for a 2TB plan is $9.99 per month. That’s a total fee of $120 dollars that you have to keep paying every year. With that amount, you could buy a high-quality external hard disk drive (HDD).

The infamous celebrity iCloud hack of 2014 may have happened years ago, but the incident still left users concerned about the security and privacy and security of their data. There are experts who think that offline storage devices offer more security (when encrypted) than cloud or web-based storage platforms.

Although you can edit files offline, you can’t make full use of iCloud’s capabilities unless you are connected to the internet. This can be an inconvenience especially when you need access to important files in an area with poor reception and no Wi-Fi.

Looking for a more cost-effective way to store your files without the need for an internet connection? Then look no further than BaseQi’s Ninja Stealth drive. Designed by innovators who have nothing but passion for all things Mac, the Ninja Stealth drive is a highly portable, affordable, and versatile storage solution that lets you add up to 400GB worth of storage to your MacBook.

The Ninja Stealth Drive is an aluminium MicroSD adapter that fits perfectly into any MacBook model. With four different finishes, it’s so easy to find the right adapter for you.

So, what are you waiting for? Grab a Ninja Stealth Drive today. 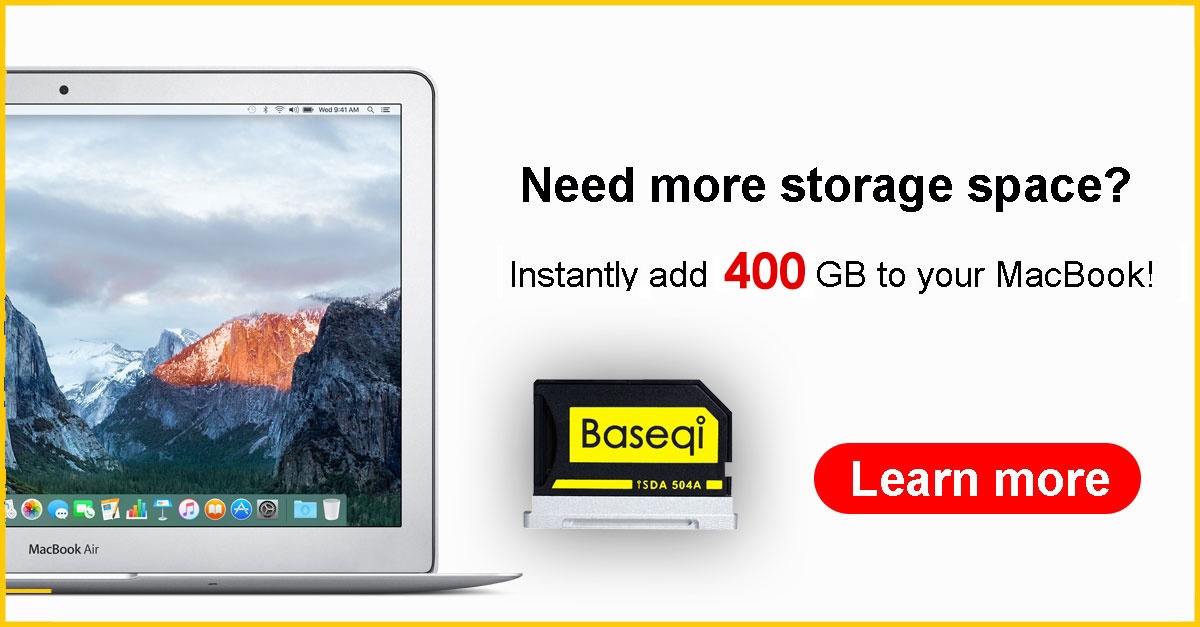