HDD vs SSHD vs SSD: A beginner’s guide

Whether it’s for adding apps to your device or saving your important files and folders, reliable storage is an absolute must for your MacBook. However, there’s more than just one kind that you can choose, and the best option isn’t exactly as obvious and clear as you would think it is.

A hard disk drive, or HDD, is the default data storage device of today’s laptops and desktops. This is where you’ll find the operating system and required apps installed on your machine. It varies in storage capacity depending on the machine model you are using, and uses magnetic storage, spinning disks, and a moving actuator arm to write, retain and fetch digital information whenever needed. HDDs do not require the data to be retrieved in a specific or sequential order, as it does so in a random access manner.


The first HDDs were introduced in the market by IBM in 1956, and quickly became the secondary storage unit of choice for ordinary computers in less than a decade. In the case of the MacBook, Apple provides detailed instructions on how users can back up their files and upgrade their hard drive storage.


For most casual users, the stock HDD that comes built-in is more than enough for their purposes. But what if you wanted a significant upgrade AND more flexibility in terms of where and how you can access your files? You may want to consider portable storage devices such as an SSD or an SSHD.

In terms of function, the SSD (or solid-state drive) follows the operating principle of a USB flash drive, albeit with a larger capacity and quicker loading time.


SSDs use integrated circuit assemblies and electronic interfaces that are compatible with traditional HDDs. However, unlike the previous example, SSDs have no moving parts, relying instead on a microchip (which accounts for why it delivers a much faster experience).


One can argue that the proto-SSD was the 1978 StorageTek 4305, a semiconductor storage unit that was designed to work with typical HDD-reliant machines. However, the first actual SSD actually came out in 1991, in the form of SanDisk Corporation’s SSD for IBM’s Thinkpad laptops. This particular SSD had a storage capacity of 20 MB.


Not surprisingly, improved performance comes at an increased cost. As of 2017, SSDs slightly declined in terms of price (24 cents per gigabyte), but still added up to a price tag that is four times pricier than what consumer-grade HDDs can offer.

Yet another option exists in the form of the SSHD, or solid-state hybrid drive. It is exactly what you would think it is, based on its name: a mostly standard hard disk, but with a certain amount of solid-state storage within it as well. When you plug it into your machine, it is recognized as just one device. An embedded controller chip decides the destination of the files you save on it - whether it goes to the SSD or the space allocated for the HDD. For this reason, SSHDs do not require any special software or configuration prior to use.


The first hybrid drives came out a little over a decade ago. In 2007, tech companies Samsung and Seagate pioneered the hybrid drive with their respective models, the Samsung SpinPoint MH80 and the Seagate Momentus PSD, both of which were 2.5-inch drives that came in 128 MB and 256 MB flash memory variants. However, the first product to actually bear the “solid-state hybrid drive” moniker was Seagate’s Momentus XT, a 500 GB HDD/4 GB NAND flash memory drive, which was released in 2010.


The verdict: HDD vs SSHD vs SSD


The simplest way to figure out which of these three options is best for you is to determine what you value most when it comes to storage.


If you’d like to read more tips on deciding which upgrades and accessories to buy for your MacBook, follow our blog submitting your email below.

Hi, we are team Baseqi, thank you for reading our blog! We are a technology startup founded by a team of passionate designers and Apple fanatics. Our goal is to design unique and high-quality accessories at cutting edge prices for all Apple lovers.

Please take a moment to look at our latest invention. Do you need more storage space on your MacBook Air or MacBook Pro? Insert a Baseqi's Ninja Stealth Drive and add up to 400GB+ to your MacBook instantly.

Over 100,00 pieces of Ninja Stealth Drive has been sold worldwide. It is a unique invention and loved by tens and thousands of MacBook users. It is a great and simple way to upgrade your MacBook's storage space. Click on the link below to learn more! 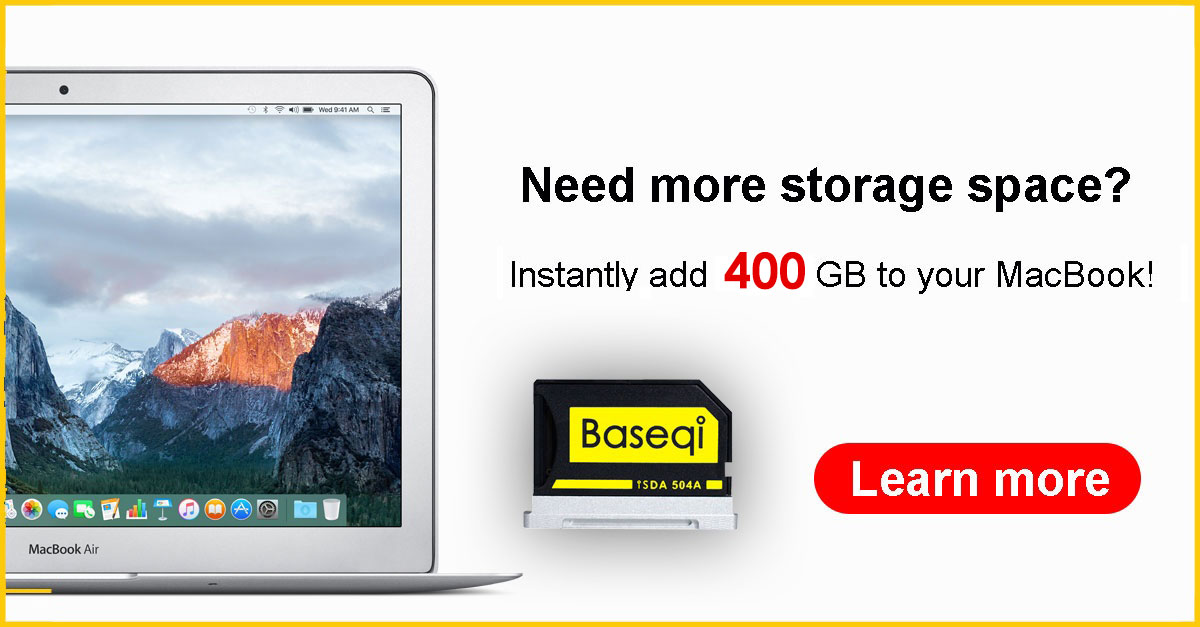